Crew Survives the Wreck of the Columbus at Buzzard Point : Tale No. 2 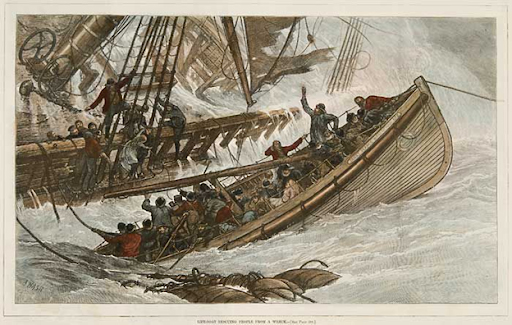 Shipwreck in the 1800s
(Image: Courier and Ives)

Note to Reader. While researching the online files of the Evening Star to determine how Buzzard Point might have become viewed as “haunted, cursed ground” during the Civil War (see a forthcoming article called The Magic Triangle), I looked up its earliest editions out of nostalgic curiosity. In the January 8, 1854 edition of the Daily Evening Star (as it was initially called), I came across the following short news item.

Washington City – Jan. 7, 1854. The schooner Columbus was wrecked yesterday by a sudden, violent that drove it aground at Buzzard Point.

With great effort, the crew launched its longboat successfully and landed safely, though one crew member was washed overboard and had to be revived.

The Columbus was carrying a cargo of valuable timbers from Puget Sound to Alexandria when massive whitecaps and storm surge raised by the storm carried it northward beyond its intended port.

The violence of the storm broke up the Columbus and scattered its cargo of valuable timbers along the Anacostia and as far north as Great Falls on the Potomac.

“We were very lucky to save our lives,” said Captain Gregory Bierholder. “The crew of the ill-fat Columbus never wants to see Buzzard Point again.”

“A cargo of valuable timbers” – Portland Timbers is an MLS rival in the Western Division though generally well thought of by DC United fans (except when we play them).

“The Puget Sound” – The general location of the Seattle Sounders, another MLS rival in the Western Division, which is generally disliked by DC United fans for their overarching conceit (based on 40,000+ average attendance).

“The crew of the ill-fated Columbus” – Like DC United, the Columbus Crew is an original founder of Major League Soccer and long-time Eastern Division rival.