Giving Thanks for the Approval of New Buzzard Point DC United Stadium, 2014 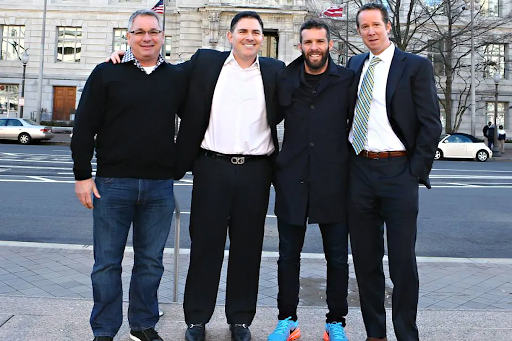 The D.C. United stadium at Buzzard point is now approved by the District Council (as of December 2014). To achieve this miracle required a perfect storm of support from United, the current mayor, the mayor-elect, the DC City Council, Buzzard Point landowners, the business community, supporters groups, local soccer organizations, and casual fans. A thanks to all.

Many people deserve the gratitude of each and every D.C. United fan for their contribution to the successful conclusion of the stadium deal. We've started a list, and are checking it twice. We're sure we'll miss some people: For example, DC Council staffers in the Wilson Building who have toiled for this project anonymously. We apologize in advance, and we'd encourage all in the B&RU community to add names they know in the comments.

It is the time of year to give thanks, and this is especially the case for DC United fans. So in more or less chronological order, based on the progress of the stadium:

Thanks to the DCU ownership group, Erick Thohir, Will Chang, and especially point man Jason Levien, for their commitment to stay in DC and for approaching the negotiations with patience and a realistic sense of what the city would be willing to shoulder for the new stadium.

Thanks to Mayor Vincent Gray for putting the stadium high on his agenda. He started the ball rolling, and now it is being kicked all the way into a new stadium. He leaves office with a considerable legacy at Buzzard Point.

Thanks to City Administrator Allen Y. Lew, the District's point man on the stadium negotiations, for putting together a realistic plan that would benefit the city as a whole. He also did all the negotiations over the land and commissioned supporting studies on urban planning, traffic, costs and benefits, land values, and environmental studies.

Thanks to City Council Chair Phil Mendelson for retaining an open mind throughout the process, for his decision to commission an outside expert firm to assess the stadium deal, and for paying heed to concerns expressed here and elsewhere that the cost-benefit analysis needed to assess the project over its full 30-year life, not just 10 years. He seemed like a stadium Grinch early on but became one of the stadium's biggest supporters at the end.

Thanks to those responsible for preparing the reports rightly demonstrating that the proposed stadium deal was good for the city as a whole. First up was a Brailsford & Dunlavey study for the city administration. Next came the joint effort of Convention, Sports & Leisure International (CSL), the Robert Bobb Group and Integra Realty Resources for the Council. They all did a thorough and credible job. The CSL cost-benefit report in particular gave the DC Council comfort that the DC United stadium was a good investment for the District. Along with the urban, transportation, environmental and real estate studies, these reports cleared away the many political concerns regarding the stadium.

Thanks to Mayor-elect Muriel Bowser for taking ownership of the stadium project in the Council after her election. She consistently stated that she wanted to keep DC United in the District, but we often did not believe her. She quickly recognized the political difficulty of including the Reeves Center as part of the Stadium Act and worked to find an alternative solution while keeping to the critical end-of-year timeline. With her leadership, the Council crafted and unanimously approved legislation. It was an impressive debut for the incoming mayor. Now we believe.

Thanks to the entire DC Council for approving the stadium legislation unanimously, demonstrating citywide support for the project. A special thanks goes to Council Members David Grosso and Anita Bonds for meeting with District Citizens United for a Soccer Stadium (DCUS) and sharing their insights on possible ways forward. They both were very gracious.

Thanks to the late Marion Barry for his support as well. Looking around at the councilmembers he kept saying at the public meetings, "I've supported a stadium for DC United long before anyone else here." It was true.

Thanks to Ben Olsen and all the DCU players and coaching staff for presenting a conference championship season as the backdrop for work on the stadium negotiations. Everyone was hoping for a turnaround after winning only three league games last year. But worst-to-first was an unexpected gift.

Thanks to DCU Chief Operating Officer Tom Hunt and his management team for constantly thanking us for our support, just as we were thanking them for keeping focused and staying positive in the face of the major obstacles to keeping DC United in Washington DC.

Thanks to all the parties to the stadium deal for negotiating in good faith with an eye toward reaching an agreement. A special note of thanks to Akridge for its consistent support for the new stadium. Even though they lost out when the Reeves Center was dropped from the final deal, they kept their expression of disappointment measured and pragmatic. You might say they "took one for the team."

Thanks to the business community and labor groups, which went out of their way to testify in support the new stadium.

Thanks to the Barra Brava, Screaming Eagles, La Norte, District Ultras and other supporter groups for being who they are and doing what they do. They are the "public face" of the fan base.

Thanks to all of the DC United supporters who contributed to the strong showing at the Council. A sea of Black and Red demonstrated support at all of the public meetings.

Thanks to Unite DC for effectively demonstrating the significant grass-roots support for the stadium to the Council.

Thanks to everybody who joined DCUS, the independent grass-roots organization the three of us set up to mobilize DC residents willing to express their views to the Council. All contributed valuable time and unbelievable effort to help make the stadium a reality. We especially thank the ward co-chairs.

Thanks to DC Stoddert and other District, Maryland, and Virginia soccer organizations willing to step up to express their support for a stadium in the District.

Thanks to Black and Red United for serving as the nerve center, a kind of mission control. Thanks to Adam Taylor, Ben Bromley, Jason Anderson, Martin Shatzer, and all the other correspondents, contributors, and posters here. The Black & Red United blog by far is the best in MLS.

Thanks to all the local journalists on the front lines covering the stadium story for the steady stream of accurate information. They were true professionals reporting a major local story through unexpected twists and turns, sometimes by the minute.

Finally, a note of thanks that it is rumored that Clyde Simms received a new kidney yesterday! The stadium is unbelievably fantastic news for DC fans, but if true, this is the greatest gift of all. We wish him a speedy recovery.

We promise to stay on the case and update you as stadium developments warrant until we are all sitting in the stands for the first match at Buzzard Point!