The Society of the Cincinnati Not Welcome at Buzzard Point: Tale No. 23 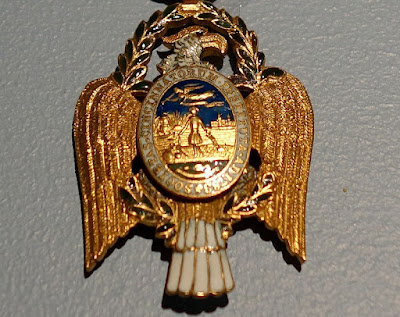 Badge of the Society of the Cincinnati, c. 1783
(Image: Cincinnati Art Museum. Photo by Daderot via Wikipedia Commons-)

Editor's Note: The history of Buzzard Point is full of surprises. A long-time patriotic organization called The Society of the Cincinnati was banned from Buzzard Point because it was considered a type of military organization. I did the original research on this myself and report it here.

In researching the history of Fort McNair, Buzzard Point’s next-door neighbor, I found the congressional legislation from the Sixth Congress — enacted May 7, 1800 — that established Fort McNair's predecessor which was called the Washington Arsenal. Congress was worried that militia groups might be a destabilizing influence in the new nation. Congress passed an act to counter the influence of such groups in the newly established US capital

Chap. XCVI. An Act for the Regulation of Public Arsenals and Magazines.

Sec. 5. And be it further enacted, That to insure domestic tranquility, no rifle club, shooting range, militia armory, nor meeting hall for any military association, including the Society of the Cincinnati, shall ever be located within one mile of the Washington Arsenal.

Pierre L’Enfant’s plan for the federal district had designated 28 acres of Buzzard Point for military fortifications defending the capital city, and earthworks for one cannon were thrown up in 1791, and the arsenal first occupied the site in 1801.

The modern-day Armory, of course, is on the RFK Stadium campus, three miles away from Buzzard Point, as explained by this very law.

Origins of the Society

The Society of the Cincinnati, however, has an even older pedigree. Major General Henry Knox, Washington’s artillery commander and later his first Secretary of War, founded the Society on May 13, 1783, at Fishkill, New York, as the Continental Army waited for the British to evacuate New York City

Its membership was pledged to “perpetuate the remembrance of this vast event” (the achievement of American independence), “to preserve inviolate those exalted rights and liberties of human nature,” and “to render permanent the cordial affection subsisting among the officers” of the Continental Army and Continental Navy who served during the Revolutionary War.

The Society of the Cincinnati was named after Lucius Quinctius Cincinnatus, who left his farm to accept a term as Consul for the good of the Roman Republic. He served as Magister Populi and assumed lawful dictatorial control of Rome in the Second Punic War against Hannibal after Rome’s horrendous defeat at the Battle of Cannae in 216 BCE. When the immediate crisis had passed, Cincinnatus returned his power to the Roman Senate and went back to plowing his fields.

In the 18th Century, though, the Society named for Cincinnatus was instantly controversial. First was its hereditary nature as membership would be passed down from founding officers to first sons through the generations under the doctrine of primogeniture. An early critic was Benjamin Franklin, who in a letter to his daughter Sarah Bach, wrote in 1784:

I only wonder that, when the united Wisdom of our Nation had, in the Articles of Confederation, manifested their Dislike of establishing Ranks of Nobility, by Authority either of the Congress or any particular State, a Number of private persons should think proper to distinguish themselves and their Posterity, from their fellow Citizens, and form an Order of hereditary Knights, in direct Opposition to the solemnly declared Sense of their Country.

Of probably greater concern was a possible political threat to the young republic. During the Constitutional Convention of 1787, when delegates were debating the method of choosing a president, Elbridge Gerry of Massachusetts (later, the father of gerrymandering) warned, in the telling of James Madison:

A popular election in this case is radically vicious. The ignorance of the people would put it in the power of some one set of men dispersed through the Union and acting in Concert to delude them into any appointment.

[Gerry] observed that such a Society of men existed in the Order of the Cincinnati. They are respectable, United, and influential. They will in fact elect the chief Magistrate in every instance, if the election be referred to the people. [Gerry’s] respect for the characters composing this Society could not blind him to the danger and impropriety of throwing such a power in their hands.

The result was the adoption of the Electoral College, to dilute the power of the masses, rather than a direct election for president.

The same distrust led to the legislation that barred the Society of the Cincinnati from the vicinity of the Arsenal.

So the question isn’t really why the Society of the Cincinnati, since 1937, has made their national headquarters at the former Larz Anderson mansion at 2118 Massachusetts Avenue, NW, on Embassy Row near DuPont Circle.

The real issue is where the headquarters of the Society of the Cincinnati cannot be located. The answer to that question is at Buzzard Point.