Editor's Background Note: The newly-discovered adventure of Sherlock Holmes really piqued my curiosity. It was the cabbie’s reason for refusing to drive Holmes and Watson from the Willard Hotel all the way into Buzzard Point: “T’is haunted, cursed ground. Ever since thuh war.”

Though no battles were fought near the City of Washington (except for Confederate General Early’s attack on Fort Stevens in 1864), the national capital was filled with tens of thousands of union troops (and hospitals to care for casualties) throughout the conflict. The Washington Arsenal abutting Buzzard Point was used extensively for testing new armaments, including breechloaders, the Spencer rifle, and the Gatling gun.

I began my search for any sign that Buzzard Point had become known as “haunted, cursed” ground during the Civil War by reviewing the Library of Congress’s online microfilms of the Evening star the three different periods of my life that I have lived in the Washington, DC area). I decided to start with the beginning of 1862 by which time Washington City had been steadily filling with Union troops and hoped that any news about Buzzard Point would be carried on the front or second page rather than on pages three and four (that seemed to be mostly advertisements).

After many, many hours of scrolling through the microfilmed front and second pages (that must be magnified to be legible), I was rewarded by the following intriguing article from September 1862.

The regiment had just arrived at Buzzard Point to take part in the defenses of Washington after fighting the Battle of Chantilly on Monday last. However, on consecutive nights troops reported seeing strange apparitions during the foggy, moonless nights.

On Wednesday night several soldiers reported seeing three ghostly figures standing in triangular formation about 100 yards east of the Washington Arsenal brick wall. The leader was described as dressed all in black, with dark, shoulder-length hair, clean-shaven but swarthy, and a diabolical glint in his eye. His companions were also dressed in black, also clean-shaven and somewhat swarthy, though the taller of the two had close-cropped blond hair. Fearing rebel spies, Col. McCoy forwarded information on the sighting to army headquarters. 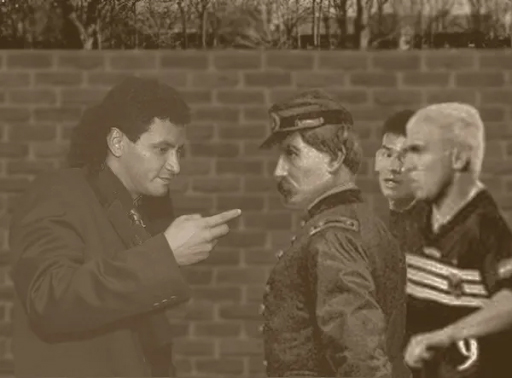 The following night the soldiers saw the ghostly triangle again but swore that “Little Mac” himself was standing in the middle of the triangle, gesticulating in a way that suggested that he was negotiating with the satanic leader.

“We were prepared to dismiss this as hallucinations of men that had drunk too much, but the next morning we found three circles, arranged in a perfect triangular formation, burned into the grass and smelling sulfurous,” Lt. Emanuel D. Roath, Col. McCoy’s aide-de-camp explained.

“The men are frantic, believing that it was ‘the Debbil hisself’ at Buzzard Point. We asked headquarters to approve the immediate removal of the 107th Pennsylvania to another campsite, which they have approved. Our men are convinced that Buzzard Point is haunted and no fit place for the Union.”

Your correspondent could secure no comment from Maj. Gen. McClellan about these rumors, but Brig. Gen. Randolph B. Marcy, his chief-of-staff, averred vigorously that the Commanding General of the Army of the Potomac had never visited Buzzard Point at any time.

The 107th Pennsylvania hardly had time to settle into its new campsite at Tennally’s Town. Scouts reported that General Robert E. Lee’s Army of Northern Virginia was marching from Centreville and Chantilly northward into Maryland and the Union Army of the Potomac started marching northwestward to intercept them.

Pulitzer Prize-winning historian James M. McPherson tells the outcome of the story in Crossroads of Freedom: Antietam. The following is a quote directly from his book.

On September 9, while he was at Frederick, Lee decided to try [to capture Harpers Ferry as well] “a rich and tempting prize: a bounty of provisions, shoes, clothing, and weapons for his needy troops... He issued Special Orders No. 191 dividing the Army into four parts. The largest part, under [Stonewall] Jackson, was to re-cross the Potomac and circle around to the west of Harpers Ferry and attack from that direction [while two other parts threatened the town from east and south]. Longstreet and Lee with the remainder of the army would stay in the vicinity of Hagerstown and the gaps through the South Mountain range... Such a division of his army ran the risk that McClellan might burst through those gaps and destroy the fragments before Lee could reunite the army... So on September 10 the Army of Northern Virginia split up and departed from Frederick on its various missions.

Three days later the Army of the Potomac marched into Frederick greeted by delirious citizens waving flags, kissing McClellan, and hugging his horse. The 27 Indiana stopped that morning in a farm field outside of town. Corporal Barton W. Mitchell flopped down in the shade of a tree along a fenceline to enjoy a welcome rest. As he relaxed, however, Mitchell noticed a bulky envelope lying in the grass. Curious, he picked it up and discovered a sheet of paper wrapped around three cigars.

As a comrade went off to hunt for a match so they could smoke their lucky find, Mitchell noticed that the paper contained writing under the heading: “Headquarters, Army of Northern Virginia, Special Orders, No. 191,” and was dated September 9. Mitchells’ eyes grew wider as he read through the orders studded with names that Northern soldiers knew all too well – Jackson, Longstreet, Stuart, Hill – and was signed ‘R.H. Chilton, Assist. Adj.-Gen. By command of Gen. R. E. Lee.’

[Through the chain of command the document was forwarded quickly to McClellan’s headquarters.] “Now I know what to do!” exclaimed McClellan... “Here is a paper with which if I cannot whip ‘Bobbie Lee,’ I will be willing to go home.”

The odds against the occurrence of such a chain of events must have been one million to one. Yet they happened. No one knows how the orders came to be wrapped around three cigars and then lost... Whatever was the true story of how these orders had been lost, McClellan was granted a windfall such as few generals in history have enjoyed. It was a remarkable example of the contingencies that change the course of history. As Major Walter Taylor of Lee’s staff later wrote, “the loss of this battle order constitutes one of the pivots on which turned the event of the war.”

I sought permission to extensively quote Professor McPherson's masterful book. I shared with him the fruits of my new research. I was grateful that on December 8, 2016, Prof. McPherson replie to me with his ascent. He also shared how his opinion of events surrounding the acquisition of Lee's order had changed after seeing the new evidence about the confrontation of the Magic Triangle with General McClellan at Buzzard Point:

At last, after more than 150 years, the mystery of Robert E. Lee's lost Orders No. 191 in the Antietam campaign is solved. As this story proves, General McClellan made a pact with the devil to have a Confederate courier lose a copy of the orders and for a Union soldier to find them. As usual with such pacts, however, this one did not ultimately come out well for McClellan, for after failing to follow up his victory at Antietam he lost his command, and two years later lost the presidential election to Abraham Lincoln and faded into obscurity."