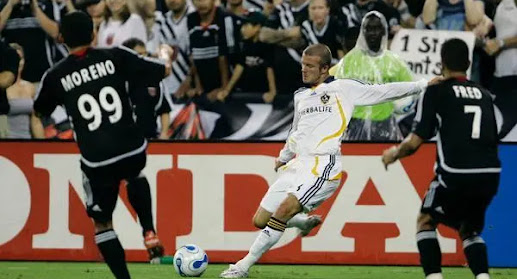 Editor's Note: This article conveys the hype and hysteria that greeted David Beckham's arrival in the United States to play soccer for the LA Galaxy. He was injured at the beginning of his tenure in MLS and there was great speculation about when he would play in his first game.

The speculation turned to reality on August 9, 2007 when he donned his LA Galaxy uniform and trotted onto the field of RFK Stadium in Washington, DC in the second half. DC United would be the first opponent of the English idol in a tenure that would include MLS championships. However, on this night before a sold-out RFK stadium and about a hundred press photographers, his first game in MLS would result in a 1-0 loss to DC United.

Friday, August 9, 2007 – it was probably DC United’s biggest crowd ever. Some 46,686 people turned out at RFK Stadium – many not to see DC United’s still-victorious squad led by Christian Gomez, Jaime Moreno, Luciano Emilio, and Ben Olsen take on the visiting Los Angeles Galaxy.

No. Many came to swoon over English soccer heartthrob David Beckham, announced as making his American debut with the Galaxy that evening.

Delcia and I took our season seats on the Quiet Side just before match time, having heard waves of feminine screams reverberating as we approached RFK from Lot 3.

Beckham was on the Galaxy bench as the match began, but the squeals, shrieks, and flashbulbs going off every time Beckham got up in his warmups to loosen up behind the Galaxy bench almost exceeded DC United fans’ celebration when Luciano Emilio scored the first (and destined to be the match’s only goal) in the 27th minute.

But midway through the second half (after a brief but violent thunderstorm ended right on cue) – Oh my God! He’s getting up. HE’S TAKING OFF HIS PRACTICE JERSEY. The shrill screams were orgasmic. Flashbulbs were so intense and constant that RFK management could have turned off the stadium lights.

Delcia and I were instantly transported back almost 41 years to the day – August 15, 1966. The Beatles concert at DC Stadium. House packed to the rafters. Probably 99 percent White and 90 percent teenage females. When the Fab Four finally emerged for a half-hour set, the screams drowned out the songs. The night turned to daytime by the constant flashbulbs (and this was decades before digital photos and iPhone cameras).

Both times resulted in adulation of celebrity run amok.

What does Buzzard Point have in store for the return of the Miami Beckhams?

I have consulted the Oracle of Buzzard Point, who sits breathing in sacred steam over the simmering pupusas.

“O Oracle, what will be the fate of David Beckham at Buzzard Point?” I asked. “Will the Miami Beckhams be idolized as at RFK?”

“No. They will be humiliated as false gods, ground into the turf by Hernan’s press.”

“Moreover,” the Oracle added, “Buzzard Point treats winged foes extra harshly whether they are loons or pigeons or flamingos/herons as we did already in March 2020.”

“But does the Curse of Buzzard Point always work?” I asked. “I mean, we lost 0-1 to both Orlando City and Philadelphia in our last two home matches.”

“Fan misconduct always cancels the Curse as shamefully happened against Orlando City. Otherwise, remember both the Buzzard Beater and Rooney’s 70-yard screamer against them.

“And Buzzard Point was only at one-third strength against Philadelphia. On June 19th Buzzard Point will be at full strength,” the Oracle intoned. “The Beckham adulation will not carry over for Orlando SC at Buzzard Point.”