A Call to Defend the DC United Fan Walk: Tale No. 18 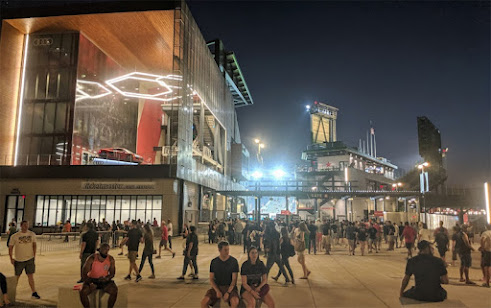 Editor's Note: With the inaugural visit to Buzzard Point of the Los Angles Football Club (LAFC) upcoming on Saturday, I found this story in The Evening Star ominous and wish to make sure that DC United fans are alerted to take appropriate countermeasures.

(Los Angeles, April 1, 2019) Supporters of Los Angeles Football Club (LAFC) are scheming to leave some kind of permanent imprint on the commemorative Fan walk outside D.C. United’s legendary Buzzard Point stadium. This will take place during their maiden visit of LAFC to the District on April 6, 2019.

Undercover intelligence agents have told The Evening Star, “We do know that the LAFC plan hinges on a win by the visitors from California.”

The fan walk outside Buzzard Point contains hundreds of testimonial marble bricks from devoted D.C. United fans. These bricks were embedded in the brick walk near the main ticket entrance and were a part of DC United's stadium inaguration celebration.

The LAFC supporter's idea might have come from the area outside Grauman’s Chinese Theater in Hollywood. The concrete sidewalk in front of the theater is world famous for the embedded handprints, footprints, messages and signatures of Hollywood stars.

Our confidential source indicated that, “We suspect that LAFC soccer vandals could try to deface the Buzzard Point fan walk as an homage to one of their soccer players." They weren't specific but maybe the footprints of an internationally recognized LAFC soccer player such as Carlos Vela will be used to deface the DC United Fanwalk.

After being advised of the intelligence reports, D.C. United issued the following statement.

We aren't concerned about the rumors of LAFC supporters trying to deface our fan walk. We shall not add any extra security around Buzzard Point. Such vandalism would only be triggered by an improbable LAFC victory. We have total confidence in our superb team. They will deny the invaders from Los Angeles any reason to celebrate at Buzzard Point.